158 new homes were built at Dunsinane estate, in the Nuwara Eliya District, owned and managed by Elpitiya Plantations PLC.    Out of  404 Housing  Units  which are being  constructed under the Indian Government’s large-scale housing project initiated in the country at a cost of Rs. 1.2 Mn.,  158 Housing Units were declared opened recently by Hon. Ranil Wickramasinghe, the Prime Minister of Sri Lanka.

The Indian Government initiated a programme to construct 14,000 housing units to provide decent houses in light of improving living standards of plantation workers under the ‘Plantation Villages’ concept introduced by the Sri Lankan Government in Central and Uva Provinces of Sri Lanka.

The General Manager of Dunsinane estate at the time when the project was initially launched, Mr. M.I. Izzadeen and the current Deputy General Manager of the up-country cluster Mr. Ranga Gunasekera and Manager of Dunsinane estate Mr. Asela Udumulla ensured the correct selection of sites, beneficiaries while assisting the respective officials of the Ministry in Hill Country New Villages, Infrastructure and Community Development and the Plantation Human Trust to facilitate the implementing Agency – UN-HABITAT to complete the task successfully.

Coinciding this event, another first ever mega project to provide safe and pure drinking water, and sanitation facilities at cost of Rs. 74 million, funded by the World Bank was ceremonially declared opened at Dunsinane estate by the Hon. Prime Minister and the distinguished guests. This project is the first of its kind implemented on an estate owned by a Regional Plantation Company and would benefit a population of over 6,000.

Elpitiya Plantations wishes to greatly acknowledge the kind gesture of the Government of India for implementing a housing project of such magnitude and for selecting Dunsinane estate to launch this Pilot Project to construct 383 housing units. A special note of appreciation to the key role played by Hon. Palani Digambaram, Minister of Hill Country New Villages, Infrastructure and Community Development, respective Ministry officials and officials of Plantation Human Development Trust and the implementing Agency – UN-HABITAT and other Government Institutions for initiating the above projects.

Elpitiya Plantations PLC is a public liability company and is one of Sri Lanka’s leading producers of exquisite high quality premium teas. The Company is managed by the Aitken Spence since 1997. Elpitiya Plantations comprises of 13 estates located in up, mid and low country regions, which cover more than 8,800 hectares. While the core business is focused on cultivation and manufacturing of tea, rubber, oil palm, coconut and cinnamon, the Company has diversified into sustainable forestry development, eco-tourism, hydropower development, and specialty teas. 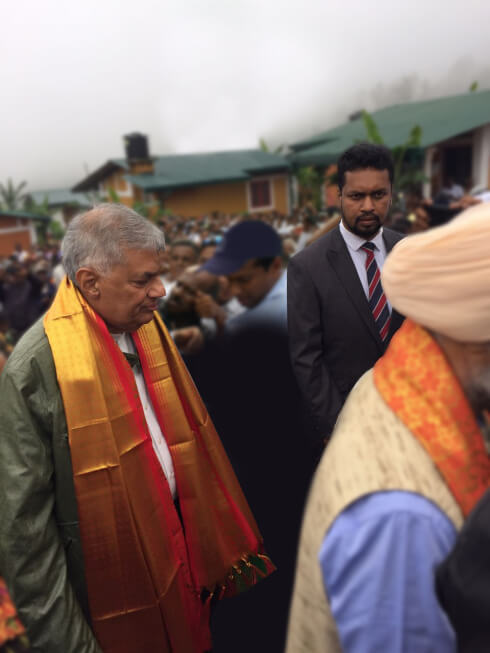